The bond of motherhood is the strongest thing in the universe, stronger than a hypernova. It follows then that the pain when that bond is broken is unquantifiable.

I have been motherless for more years than I was mothered.

I have been a mother for more years than I was a daughter.

I was going to say I lost my mum when I was seventeen, but I didn’t lose her, she died. It was as horrible as you are imaging, and then a bit worse. She was 37 years and one week old, we had just returned from a holiday to Spain and she had a 1980s suntan that only she and her beautiful olive skin could achieve. She was glowing with health when she collapsed on the bathroom floor in front of me that Saturday morning. My dad was washing the car outside when I ran out to get him, the bucket was still in the middle of the road when the ambulance came. By the time she got to the hospital there wasn’t much they could do, she had suffered a massive brain haemorrhage. She died in the early hours of the Monday morning, the 15th August 1988, assumption day. A date that is forever emblazoned in my mind. 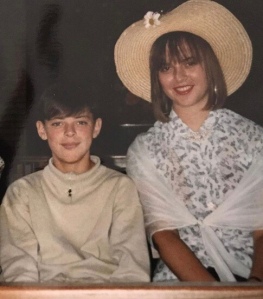 My life up until that point had been really normal, unremarkable. I had a happy childhood with a brother and a mum and dad. I was studying for my A levels and planning to go to university. We lived in a gorgeous house, had two cars, holidayed abroad every year. Life was good. On that August Monday morning my life changed for ever. I’m not going to waste time telling you how my dad behaved in the days and months following her death, he doesn’t deserve it, but from that point I was on my own, looking after my little brother I had to grow up fast. I realise now that as part of my survival mode I locked my mum and childhood away in a box and I really don’t go there very often at all.

That doesn’t mean that it didn’t hurt though, I ploughed because that’s all I could do. I chose to survive. Mother’s Day, her Birthday, and the anniversary of her death still stung and they still do thirty years later.

She left a hole I needed to fill. I needed to reform that maternal bond. I’ve written a previous blog ( https://hardcastletowers.wordpress.com/page/2/) talking about my struggle to become a mum. I miscarried six babies. This period of my life shaped me like no other. It deepened the hole inside me. When I was told I’d never have children of my own it felt like my world had ended, it really was rock bottom. A pain like that never goes away, instead you grow around it, it is always there deep inside just as it should be. It’s a pain I’ll never forget.

Mother’s Day during this time was incredibly hard I was motherless AND childless.

I’m lucky though. I have a happy ending, I won the game, I had the two most wonderful daughters and I honestly count my blessings every single day. I’m a mum, a role I have poured my heart and soul into for twenty years.

I still find Mother’s Day incredibly hard, I have such complicated feelings about it. I invariably end up in a shitty mood and having a cry. I can’t help it.

I suppose I just wanted to say to anyone else out there who dreads it that I get it too. I’m a foster mum; I have another young person living here who has a complicated relationship with her mum. My brother and his wife lost their son at four weeks old. I was involved in a web chat this week were I spoke to other people with equally sad stories. I want to remember all those people who don’t have a mum, who don’t like their mums, who can’t be a mum, who can’t be with their mum, who’ve lost children.

I salute you all.

Happy Others day to you.